False Flag -- A horrific, staged event, blamed on a political enemy and used as a pretext to start a war or enact draconian laws in the name of national security.
Post Reply
3 posts • Page 1 of 1


According to the cops there was only one shooter, Patrick Crusius, with a rifle, who killed 20 (now 22) and injured another 26: https://www.pbs.org/newshour/nation/pol ... texas-mall

As we were waiting to pay, I saw men run in shooting. There was at least three or four people… they were dressed in black.

I did not see their faces. I saw them dressed in all black… and they were the ones shooting because I could see their weapons and the bullets firing.


Another witness at 2:15, says he saw the shooter twice, dressed in all black, with a mask, but he could see his eyes.
https://youtu.be/Frxj0jYVqF0


A third Hispanic eyewitness to the shooting, told a reporter that the shooter was wearing all black and a mask, he looked “German-Anglo… about 6 foot… he had an AK-47”.

The “shooter” and the suspect in handcuffs seem to wear different pants (not black!), note the shooter´s pants with leg pockets. 
It looks like he didn’t carry extra ammunition, still Patrick Crusius killed more than 20 and wounded another 27 with a 30-round clip.

Once again there isn’t a single video released from the many, many CCTV cameras for “our safety”.


What are the odds?
The parents of one of the victims of the Stonewall Douglas High School mass shooting, Joaquin Oliver, in Parkland, Florida were in El Paso on Saturday: http://web.archive.org/save/https://www ... -shooting/


Patrick Crusius after being arrested, walked away by a single policeman.
In the background, a pedestrian isn’t even aware of the mass murderer with police escort. 
And we have some genuine heroes...

US soldier Glendon Oakley was at the mall, heard shots, pulled out his fire arm and immediately started evacuating children.
He stressed that he was “worried about the children more than about myself”.
https://youtu.be/Z4daz5cIdDw


Adria Gonzales, who “believes” that she got 48 people out of there, with tears, tells a story that sounds very confused (which I personally find more convincing than soldier Oakley)...
https://youtu.be/4L0XTxvb37Q


Here we can see “injured” people arriving at the hospital (hit with an AK47)?
https://youtu.be/LoCbnN6kFfY
For some reason internet “search” engines block my posts: http://www.ronpaulforums.com/showthread ... orld/page2

The commentator in the following video is a little sarcastic.
Starting at 10:00 we can see some “horrible” injuries, being wheeled and activities, but I personally don’t see much blood. There isn’t any medical personell...
https://www.youtube.com/watch?v=QC7YHS9-KMQ

Knowing that this video WILL be deleted, I’ve made 4 screenshots of the most terrible injuries I could see. The injuries are even less convincing than in the earlier video I posted at the hospital.
Judge for yourself...

I don’t know what they’re doing to this fat, supposedly seriously injured person (who doesn’t even move in the video). 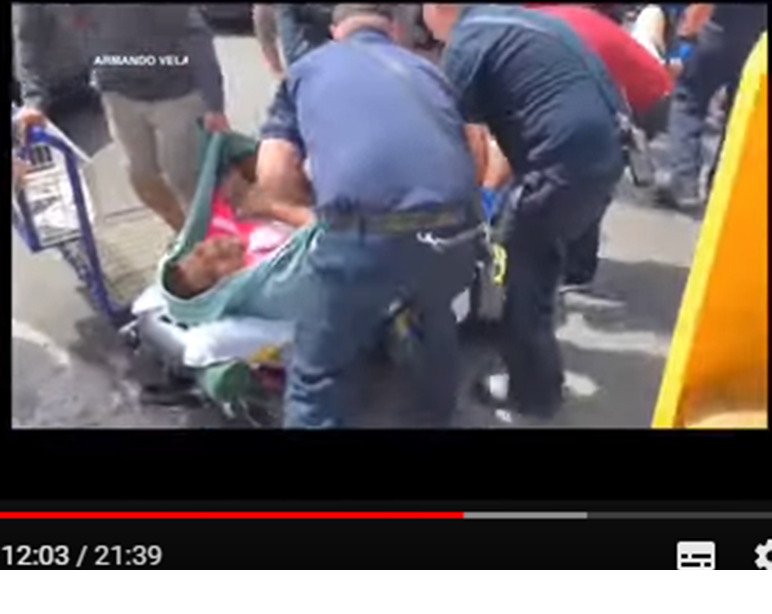 This one was close to the victim in the first picture. 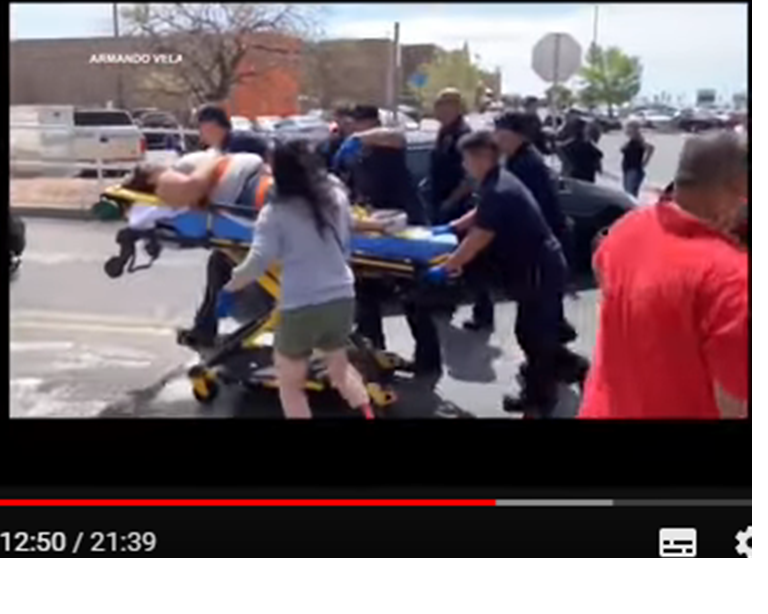 These 2 victims act injured, but don’t have any visible injuries either. 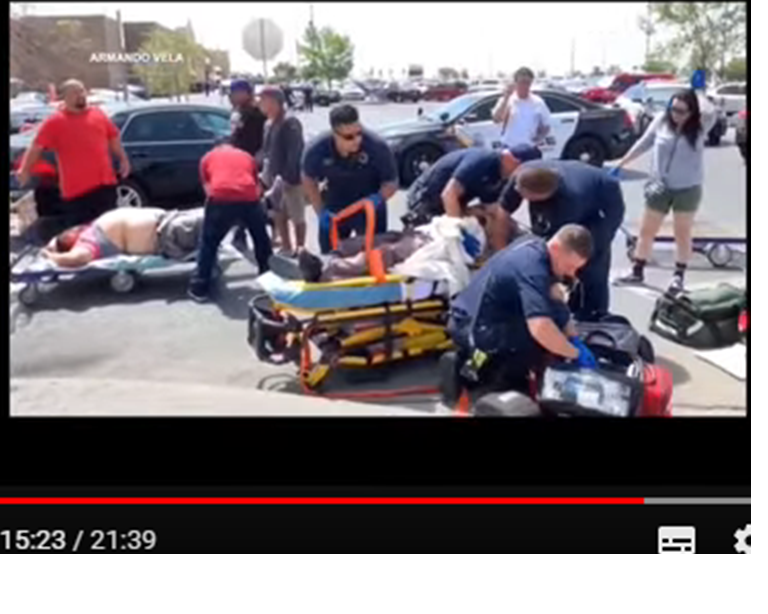 Putting injured victims in a shopping cart like this, could cause harm. 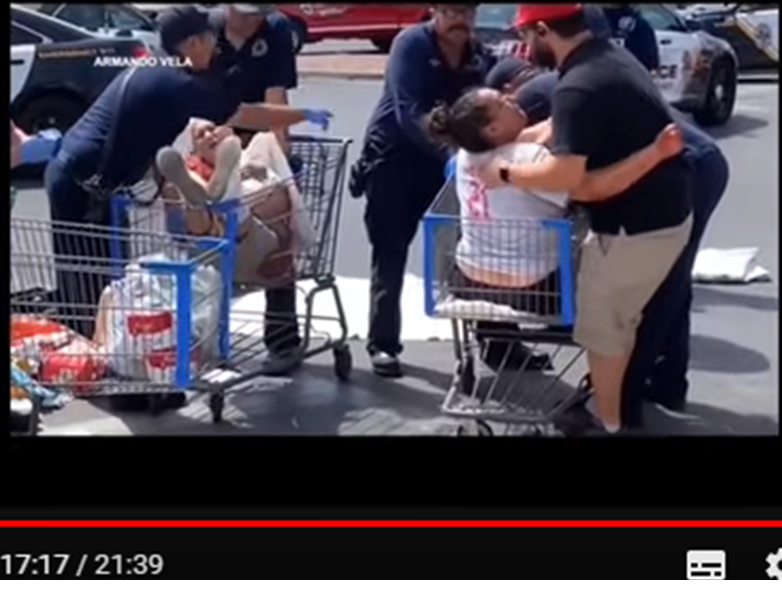 Firestarter wrote: ↑Thu Aug 08, 2019 3:26 pmUS soldier Glendon Oakley was at the mall, heard shots, pulled out his fire arm and immediately started evacuating children.
He stressed that he was “worried about the children more than about myself”.
https://youtu.be/Z4daz5cIdDw

Our hero Glendon Oakley told some strange things...
He talks about hearing gunshots from the Footlocker (at the mall), but the shooting happened at the Walmart (that’s another building).
He said he saw afraid kids without their parents. Why were all of these little kids left by their parents? Why would “rescuing” these children make him a hero as the mass shooter was hundreds of feet away?
I can imagine a soldier, who has been in combat, recognising gunshots from a distance but how could a child say something like "Active shooter" (from a long distance)? President Donald Trump has been criticised for a photograph with First Lady Melania and two-month-old baby Paul, whose parents Andre and Jordan Anchondo were murdered at the Walmart shooting.
The criticism focuses on Trump showing his trademark grin and thumb up.

Baby Paul reportedly broke his fingers, when his mother died, trying to protect him and fell on him. His father died, trying to shield her from the bullets (we can assume it wasn’t the baby who told them, so how would they know?).
I had never seen such a casket (?) for broken fingers... 
I’ve found another video with raw footage of the aftermath of the supposed mass shooting. I don’t see any visible injuries or blood like I would expect.
https://youtu.be/EcNUu-NEEHk

From 0:29 – 0:39, “something” injured is lying on the ground. What is that where the head should be? Please look at the video, throughout nothing can be seen that resembles a head.
Would’t somebody walking by take notice of the body lying on the ground (with a strange head)? Here´s another victim, who lies face down so - even though there are no visible injuries – we know that he´s really, really injured. 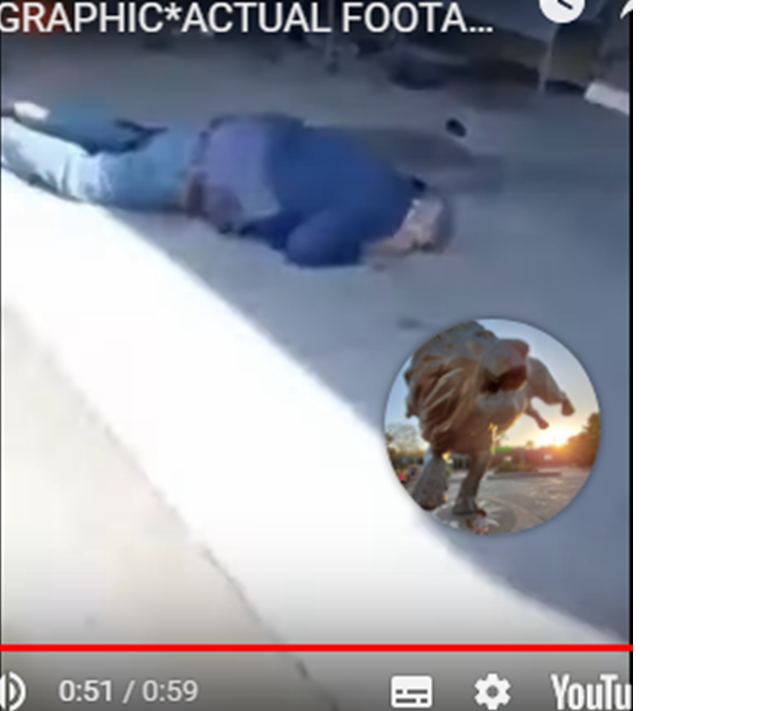 Here´s another one that was so terribly injured, shot in arm and foot, that she had to stay in hospital, Maribel Latin. It really makes everything so much more convincing that she tells she saw Patrick Crusius reloading (as otherwise he could have never killed and wounded more than 45 people)...
Personally I find it less convincing that she tells that the number of shots between reloads count exactly “eight”!
Maribel Latin said that the shooter "cold bloodedly came straight at us and shot us". Latin´s daughter got away unharmed.

Latin at one time in the video speaks with a tearful voice, but I don´t see any tears...

I looked to the front, and this guy was two cars away from us, just shooting at us. And I saw him reload his gun and walk towards us again. And he just cold-blooded came straight at us and shot us. He shot eight rounds.
I had to pretend I was dead. He was right next to me. He shot eight more rounds, and all I could say was, 'God, please don't let him do anything to my daughter or any of the girls on our team.'

He wasn't breathing hard. He was the calmest person ever. He didn't say anything, just plain hatred and just anger.