False Flag -- A horrific, staged event, blamed on a political enemy and used as a pretext to start a war or enact draconian laws in the name of national security.
Post Reply
16 posts


“Hero” Marjory Stoneman Douglas High School teacher Stacy Lippel was grazed by a bullet and speaks about the shooter:

I suddenly saw the shooter about twenty feet in front of me standing at the end of the hallway actively shooting down the hallway, just a barrage of bullets, and I’m staring at him thinking why are the police here, this is strange because he’s in full metal garb, helmet, face mask, bulletproof armor, shooting this rifle that I’ve never seen before”.

Who identified Nikolas Cruz and how did they track him to the retail store and arrested him so fast as he was wearing full body armour, helmet and mask?

This becomes even more bizarre when we learn that Cruz arrived by Uber at 2:19 p.m. without his body armour and started shooting within 2 minutes:

Within barely two minutes of being dropped off, Cruz started firing into four classrooms in Building 12, returning to two of them to shoot again, Israel said.

That is not even counting that Cruz has been reported to have been expelled from the Marjory Stoneman Douglas school and they were particularly worried that he would enter the school carrying a bag…
How would Alexa Miednik (who said she was speaking to Cruz shortly after she heard gunshots) react if an expelled student was walking through the corridor of the school?


Here’s another interesting story on the corruption of Sheriff Scott Israel.
Scott Israel has used tax money to build a “community outreach wing” to spread propaganda and help him get re-elected. The “community outreach wing” goes out into the community, including to political meetings, to praise the agency's successes under Sheriff Israel.
Ten workers were hired since 2013 into "outreach'' roles, their salaries totalling $634,479.

Israel appears to pay back his backers with well-paying, easy jobs. Here are some of the people he hired.
Shevrin Jones, a state representative and son of West Park Mayor Eric Jones.
Wally Eccleston, a political consultant and husband of Israel campaign manager Amy Rose.
Ron Gunzburger, chief strategist for Israel's successful 2012 election campaign and his re-election campaign, as general counsel for BSO making $217,547.
Harrison Grandwilliams, a member of the Democratic Executive Committee.
Anthony Stravino, a childhood friend from Long Island, was made BSO fire chief: http://www.sun-sentinel.com/local/browa ... story.html

In March of 2017, Broward Sheriff Scott Israel tells how to deal with mass shootings.
He tells that it’s up to our corrupt legal system and insane psychiatrist to decide who shouldn’t have a gun.
He also tells that his wife carries a concealed weapon.
If you want to see what a psychopath looks like…
https://youtu.be/N129MDUTFkk

And here is the Zionist Scott Israel with another Zionist – Hillary Clinton. 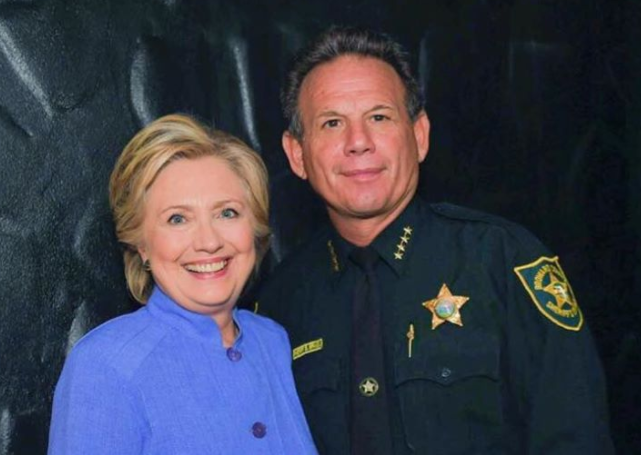 Badly wounded victim Madeline Wilford, shot 4 times by an AR-15, was already been discharged from Hospital in an amazing recovery (after being visited by Donald and Melania Trump): http://www.dailymail.co.uk/news/article ... ience.html This is what an active shooter drill, in which blanks, fake blood, students and crisis actors are used, looks like.
https://youtu.be/L-LI-CILcYc
Last edited by Firestarter on Wed Mar 28, 2018 8:52 am, edited 1 time in total.
For some reason internet “search” engines block my posts: http://www.ronpaulforums.com/showthread ... orld/page2


“Hero” student Josh Gallagher, who survived the 14 February “event” has accused his math teacher, Jim Gard, of being a coward for locking the door on the students when the shooting was taking place.
Connor Dietrich supported the story of Josh Gallagher, retweeting to Gallagher that he was among the kids left in the hallway.

According to Gallagher, the following happened after the class had evacuated the room for the (second) fire drill, when gunshots were heard - Gallagher and his classmates sprinted back to their room:

As we made it to the door we found out the door was locked.

Which then left me and 15 other students in the hallways ducking as the screams of classmates and gunshots took over the noise around me.

I called my dad up on the phone thinking this could be the last time I speak to him.
As I was on the phone with him as he tried to calm me down, a teacher I never seen before opened the door for me and 14 other classmates to flee danger.
(…)

Hours and days after the shooting I came to found out ... Jim Gard actually ran back into the classroom without turning around and locked his door.

While the shooting was happening and students were locked in the hall he actually called a news station [to] inform them what was going on instead of attempting or even thinking to save kids he left in the hall!

Josh Gallagher is very reliable as his (hero) father is a high-ranking officer in the Coral Springs Police Department.

Jim Gard says that he didn't see the students in the hall and that he locked the door because that was the protocol for a “code red” emergency. He also explains that he only “knew” that this wasn’t a drill, when he heard the choppers and see the “news”:


The ”official” death toll stands at 17 and 16 injured (14 of which were taken to local hospitals).
So far I still haven’t seen any convincing injuries of the bullets that were fired by a powerful AR-15 rifle.

Samantha Fuentes was reportedly shot multiple times, in her face and in both of her legs...
At first glance the injuries look convincing, but they aren’t injuries from bullets. The most convincing is the “black eye” on Fuentes in the first, the second is a fake “black eye” made with makeup (that is just as convincing). 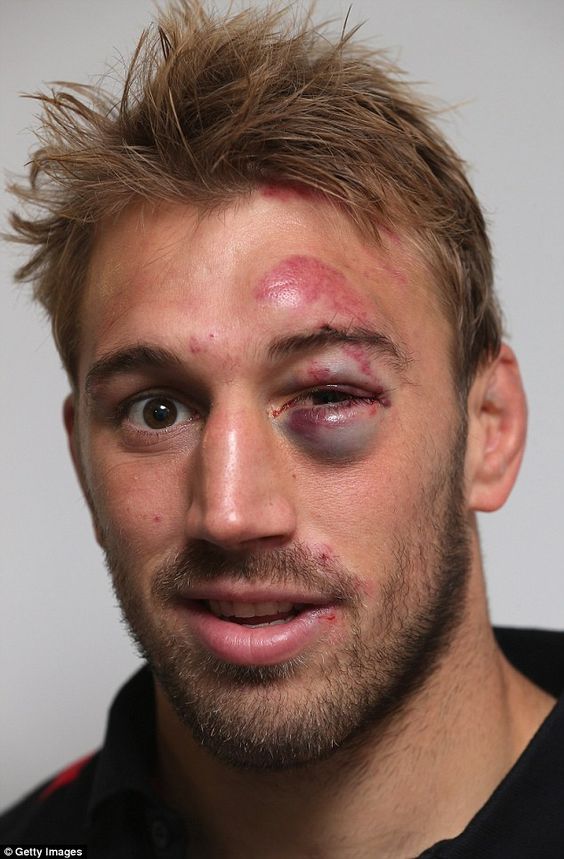 Fuentes was in a video after being release after a week in hospital, walking, and she explained that fragments of the bullets are still behind her right eye:

This is where the shrapnel entered; it, essentially, went up my cheek and then went behind my eye (lodging) behind by (eye) globe.

It is behind the lobe of my eye.
Removing it can be a very difficult procedure to have but if [the shrapnel] doesn’t migrate than they won’t have to remove it because it’s sterile and it is a piece of hot metal.

Samantha was visited in hospital by Donald Trump and Sheriff Scott Israel; see a video still from the following video.

Kyle Laman was also terribly wounded and needed surgery.
He recovered amazingly fast and is busy counting his checks.

Anthony Borges is another “hero”, “using his body to shield others from the bullets”.
Borges was shot in “both legs, the left upper thigh bone being shattered and a bullet went through his back” and has raised more than $600,000 dollars,

I’m not saying that it’s impossible that some of the victims in hospital would have relatively light injuries, but I think it's suspicious that I haven’t seen any convincing injuries at all.
That’s not even counting that no footage has been released of any of the CCTV cameras…

What will happen to the “patsy” Nikolas Cruz?
For some reason internet “search” engines block my posts: http://www.ronpaulforums.com/showthread ... orld/page2

Marjory Stoneman Douglas High School will require that all students only wear clear backpacks. Students must also wear identification badges while on campus.

Other new safety measures include locking classroom doors "at all times" and securing outside doors and gates often.

To make everybody feel safe, "Code red" active shooter trainings will be conducted on a regular basis throughout Broward County.


In the following video (starting at the 4:30 mark) David Hogg tells:

On the day of the shooting, I got my camera and got on my bike and rode as fast as I could three miles from my house to the school to get as much video and to get as many interviews as I could because I knew that this could not be another mass shooting.

Some “conspiracy theorists” claim that this means he wasn’t even in school at the time of the shooting: https://columbianpost.com/latest-news/d ... -shooting/

It has since been explained that CBS intentionally took the segment out of context.


It’s bizarre that David Hogg went home, and then back to school with his camera for more interviews...

Even more so as his sister lost 2, 3, or 4 (best) friends (dependent on the interview).
This isn’t completely impossible, in his defence I could argue that it’s possible for his sister to lose 2 “best” friends, while that could be 3 “good” friends and another lost “so-so” friend.

Another explanation is that David Hogg is a “crisis actor” that makes his stories up as he goes along: https://153news.net/watch_video.php?v=XNSDWNSHNH4K
For some reason internet “search” engines block my posts: http://www.ronpaulforums.com/showthread ... orld/page2

Broward County sheriff Scott Israel has been heavily criticised over the way the 14 February 2017 Marjory Stoneman Douglas High School “mass shooting” was handled - in which supposedly 17 people were killed and another 17 wounded.

Effective immediately, I am officially suspending Broward County Sheriff Scott Israel for his repeated failures, incompetence and neglect of duty.

I find it hard to believe that one lone wolf terrorist could shoot and kill 50 people.

In July 2018, Isaac Christian was among the 28 students and 4 chaperones who traveled to the University of Canterbury in Christchurch — to help the students cope with the aftermath of the mass shooting at the Marjory Stoneman Douglas High School: https://www.nbcnews.com/news/us-news/ne ... ch-n983791

So after 3 1/2 years of interrogations and talks with his backstabbing attorneys, Nikolas Cruz pleads guilty to 17 murders at the Marjory Stoneman Douglas High School shooting in Parkland in Florida in 2018.
Cruz had initially pleaded not guilty to the crimes.


So case closed, no further investigation of what really happened, as he has pleaded guilty...

The video is mostly about judge Scherer asking Cruz about his mental state, his understanding of the law and explaining the consequences of pleading guilty.

The end of the video is the most interesting (starting at 0:52:00), where Cruz sort of explains why he is pleading guilty (because he feels "sorry"), which doesn't make a lot of sense to me (although he sounds more coherent than I would've expected).

This is followed by the request to immediately sentence Cruz for attacking a (or more?) cop, which the judge does (how many years in total?)...
After this, Cruz's "defence" attorney asks to immediately sentence Cruz to life in prison.
https://www.youtube.com/watch?v=0wE4Fb5VLss
For some reason internet “search” engines block my posts: http://www.ronpaulforums.com/showthread ... orld/page2