Palestine and the PLO

PALESTINE enters into the CONTRACT of the ARCH – 1964

The Palestine Liberation Organization (PLO) is an organization founded in 1964 with the purpose of the "liberation of Palestine" through armed struggle. It is recognized as the "sole legitimate representative" of the Palestinian people by over 100 states with which it holds diplomatic relations and has enjoyed observer status at the United Nations since 1974.Due to its activities, including violence aimed at Israeli civilians the PLO was declared by the United States to be a terrorist organization in 1987, although a presidential waiver has permitted contact since 1988. In 1993, the PLO recognized Israel's right to exist in peace, accepted UN Security Council resolutions 242 and 338, and rejected "violence and terrorism". In response, Israel officially recognized the PLO as the representative of the Palestinian people. However, the PLO has employed violence in the years since 1993, particularly during the 2000–2005 Al-Aqsa Intifada. On 29 October 2018, the Palestinian Central Council suspended the recognition of Israel and halted security and economic coordination in all its forms with it. 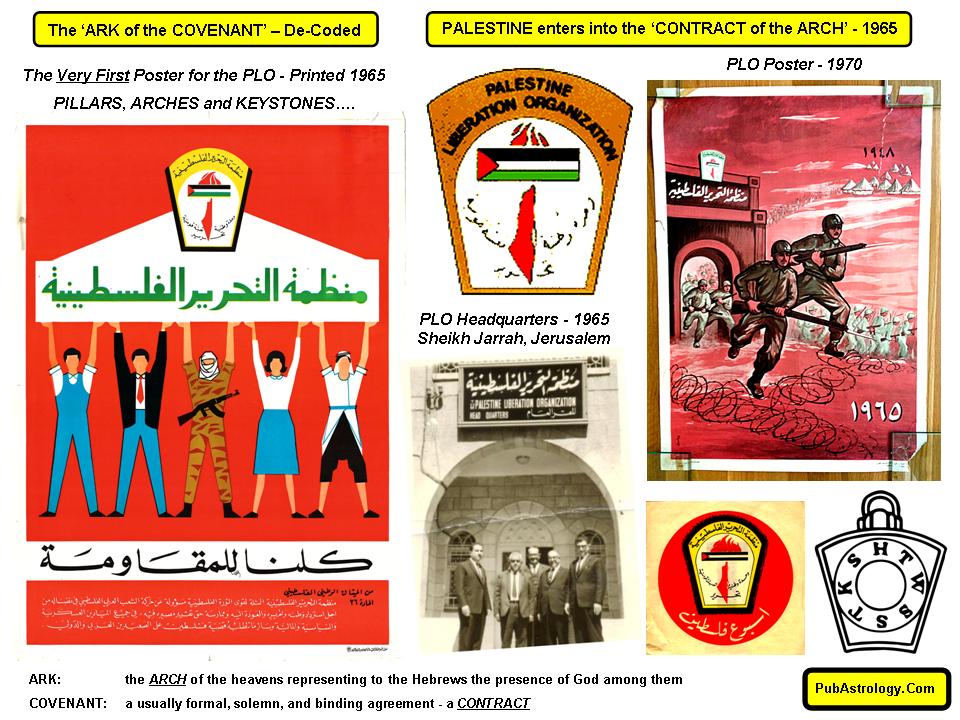 PALESTINE enters into the CONTRACT of the ARCH 1965 by Prince Arthur, on Flickr

The Very First Poster for the PLO - Printed 1965

[Ismail Shammout speaking] “With this poster, I wanted to introduce [the PLO] logo, and at the same time convey the idea that the Palestinian people are the pillars of this organization.” The artist portrayed the necessity of a unified Palestinian people and its relationship to the nascent liberation movement. The form of a Greek temple with a gabled roof adorned with the recently released PLO slogan was supported by a number of people standing upright like columns. In their varied appearances, they seem to represent different social classes. Affirming this central meaning, the slogan: “We are all sons of Palestine” is written below. A version of this poster released after 1967 modified this slogan to read: “We are all for the resistance.”
Source: "The Palestinian Poster" by Dr. Shafiq Radwan (1992)

Interesting... quite the propaganda campaign to recruit Palestinians to the PLO, controlled opposition created by the KGB. While the Soviets are arming Israel, they are grooming Arafat (Mohammed Yasser Abdel Rahman Abdel Raouf Arafat al-Qudwa Al-Husseini) to "fight back." Do you know who is pictured in the arch at the headquarters? Here is a pic of the al-Husseini clan owned Orient House, PLO headquarters in 80's and 90's with its arches:

HONG KONG enters into the "CONTRACT of the ARCH" 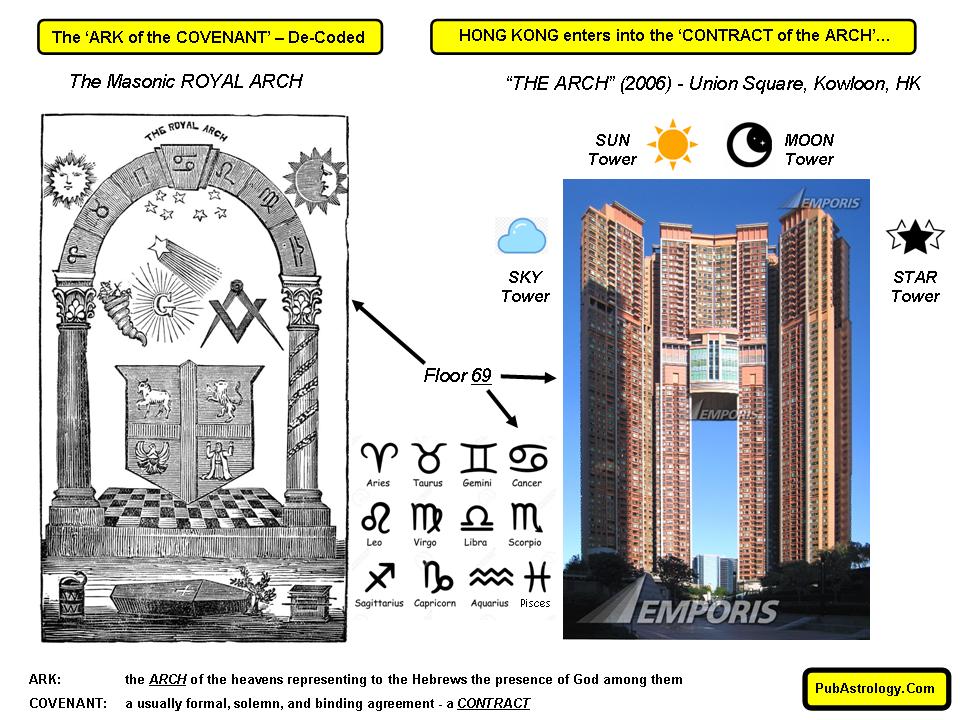 HONG KONG enters into the CONTRACT of the ARCH by Prince Arthur, on Flickr

The ARCH is an 81-floor 231-metre (758 feet) tall skyscraper completed in 2006 in Union Square. It is the third-tallest residential building in Hong Kong, consisting of four towers: Sun Tower, Star Tower, Moon Tower, and Sky Tower. The Star Tower is connected to the Moon Tower, while the Sky Tower is connected to the Sun Tower. The Sun and Moon Towers joined on the 69th floor and above to form an ARCH, hence the name "The ARCH".


Most expensive flat in Asia sold in Hong Kong

A luxury flat in Hong Kong has sold for 225 million Hong Kong dollars (28.8 million US), the most expensive apartment per square foot ever sold in Asia ($41,000 HKD per square foot), a report in the Sing Tao Daily said.

The 80th floor penthouse has a private swimming pool and spectacular view of Hong Kong’s Victoria Harbour. The 5,497-square-foot (511-square-metre) flat, with its own roof-top terrace, is located in a new complex called The ARCH, in Hong Kong’s Kowloon area.

Chinese ARCHitecture in the new Millenium...

Connected with the Hong Kong troubles? 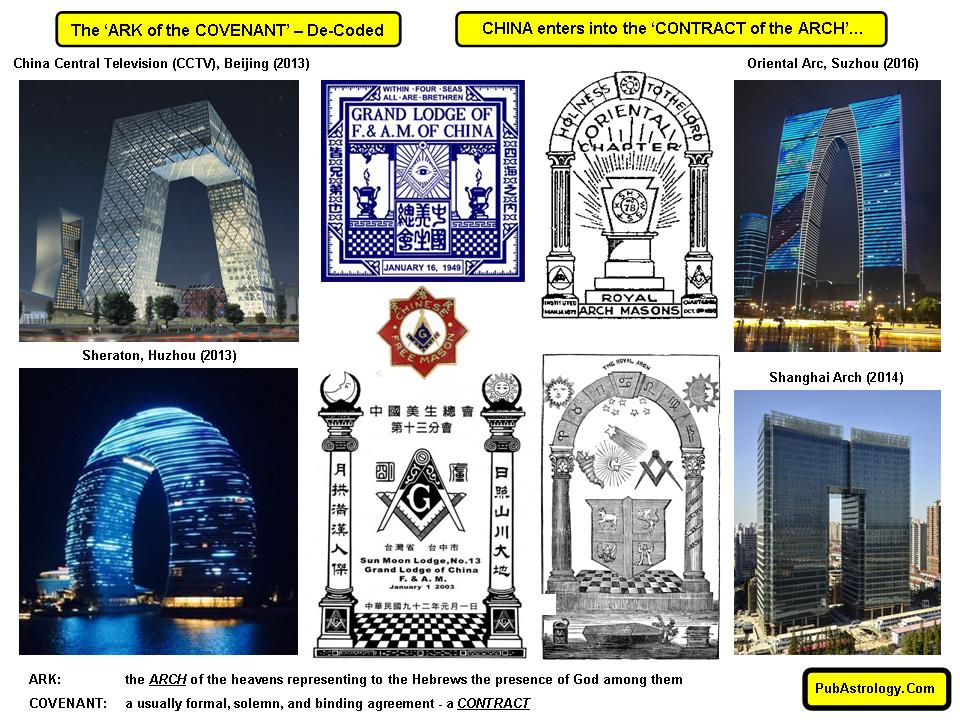 CHINA enters into the CONTRACT of the ARCH by Prince Arthur, on Flickr

The ARK of the COVENANT 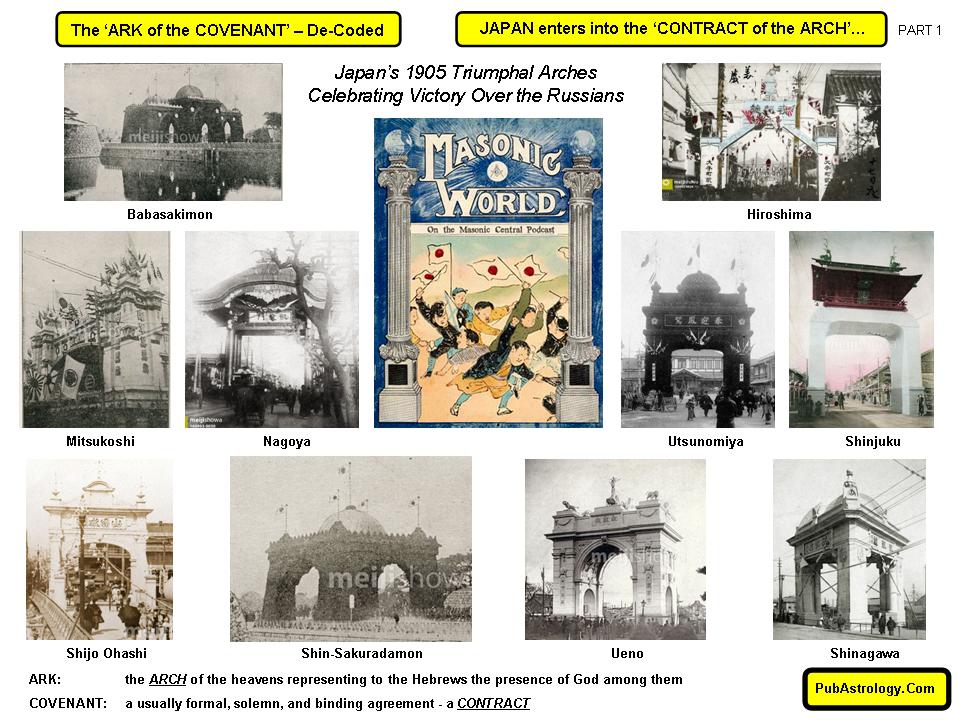 JAPAN enters into the CONTRACT of the ARCH p1 by Prince Arthur, on Flickr


The Russo-Japanese War was fought between the Empire of Japan and the Russian Empire during 1904 and 1905 over rival imperial ambitions in Manchuria and Korea.

A profusion of mainly WESTERN style (?) TRIUMPHAL ARCHES were constructed in 1905 to celebrate the returning soldiers and their amazing military victories. 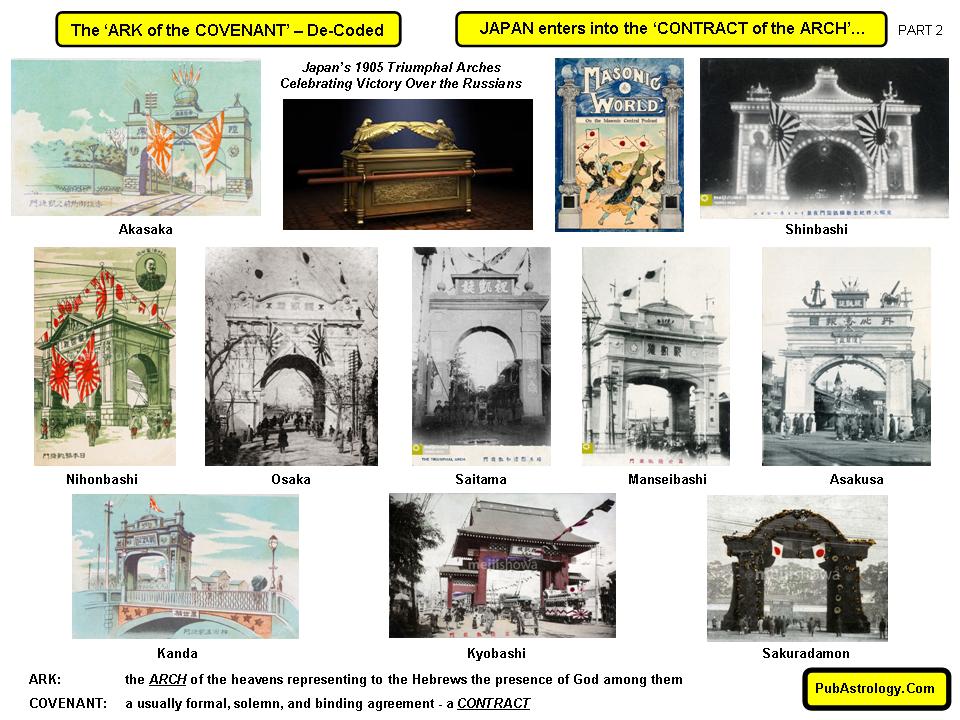 JAPAN enters into the CONTRACT of the ARCH p2 by Prince Arthur, on Flickr


What was the explanation for this strange cultural change in Japanese traditions?


JAPAN enters into the “CONTRACT of the ARCH"

Our controllers are not averse to deception, deceit and misdirection.

From the Merriam Webster Dictionary:

Definition of 'walk into'

1 : to become involved in or fooled by (something) because one is not aware of what is really happening.

He walked right into our trap.

"I can't believe you fell for that old joke!" "Yeah, I guess I walked right into that one."


Is this what our controllers are doing with the ARCHways?