I don't see much interesting stuff in the Blaze any more, but this caught my eye:

I don't agree with government interfering in how private business runs their business. If a restaurant owner wants to let his patrons smoke, and non-smokers don't like it, they can go somewhere else. The market decides if the restaurant owner is right.

However, this one is a little different.

Some businesses post signs forbidding patrons (even those who have a concealed carry permit) from carrying a firearm into their place of business. As we know, this practice of creating gun-free zones ends up putting a lot of people at risk.

This Florida senator has introduced a bill into the Florida legislature which, if passed, will put the burden of liability upon business owners. If they don't allow their patrons to protect themselves, then the business owner must provide adequate security. The test of what is adequate, of course, is the business owner becomes responsible for any death, damage, or injury that befalls his patrons-- but only if he has forbidden his patrons to carry.

Such a law seems to me to place all the burdens of liability exactly where they should be. Many progressive liberal business owners may find the true price of their convictions too high to maintain.

It's an interesting idea; I wish I'd thought of it. I predict if the bill passes we'll see a lot of those signs disappear.
--
Editor
Lawfulpath.com
Top

Steube's previous bills, SB 610 and HB 819 were “indefinitely postponed and withdrawn from consideration” and dead. Maybe this one, SB 120, will get more action.

I don't have a problem with businesses choosing to be "gun-free zones;" I just don't choose to use their services, and I tell them why. If enough people stop patronizing these businesses, they will have to change their policies.

In the past we've given out stickers like the one below to pacifist anti-gun friends and family. They have this shocked look and say, "No, we'd never advertise that we are gun-free!" 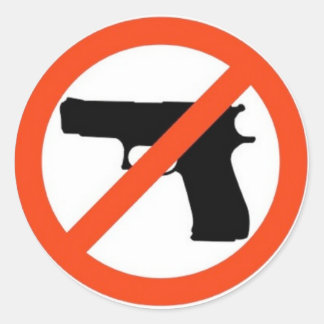 In the 90's in Arizona bars would make you check your guns at the door. It was an open carry state, but I guess there was more liability for the business with gun toting drunks than without. They had up signs something to the effect of "this place could get dangerous, enter at your own risk." Bars were always packed anyway.
Top

In the past we've given out stickers like the one below to pacifist anti-gun friends and family. They have this shocked look and say, "No, we'd never advertise that we are gun-free!"

Project Veritas recently did a video similar to this. They sent someone out to the homes of prominent anti-gun politicians, with a sign that said something like "We are gun-free", and asked them to put it in their yards. None of them would do it, of course.

Guns Save Over Two Million Lives In America Every Year
By Chuck Baldwin
April 26, 2018


Back in the fall of 1995, Florida State University criminologist Professor Gary Kleck published what is probably still to date the most comprehensive study ever conducted in the use of defensive arms by American citizens. His findings concluded that the American people use a gun to defend themselves and others over two million times a year. You read it right: over two million times a year.


In the 1990s, the CDC itself did look into one of the more controversial questions in gun social science: How often do innocent Americans use guns in self-defense, and how does that compare to the harms guns can cause in the hands of violent criminals?

Florida State University criminologist Gary Kleck conducted the most thorough previously known survey data on the question in the 1990s. His study, which has been harshly disputed in pro-gun-control quarters, indicated that there were more than 2.2 million such defensive uses of guns (DGUs) in America a year.

Now Kleck has unearthed some lost CDC survey data on the question. The CDC essentially confirmed Kleck’s results. But Kleck didn’t know about that until now, because the CDC never reported what it found.

The report goes on:


The CDC dug into the question of how often Americans defend themselves using firearms. And they did an impressive job of it, in Kleck’s opinion. The only problem with their findings was that they confirmed Kleck’s results.

Why is that a bad thing? Because based on his research, Kleck found that the number of defensive gun uses in the US was somewhere between 2.1 and 2.5 million per year, a huge multiple over the number of crimes involving firearms. Not the lower (though still significant number of 500,000) total that the CDC had claimed.

For those who wonder exactly how purely scientific CDC researchers are likely to be about issues of gun violence that implicate policy, Kleck notes that “CDC never reported the results of those surveys, does not report on their website any estimates of DGU (Defensive Gun Use) frequency, and does not even acknowledge that they ever asked about the topic in any of their surveys.”

Gee, why would they bury important results like that? It’s almost as if the white coats at the CDC would rather not publicize any findings that would cast a bad light on the argument for more control and restrictions of civilian-owned firearms.

Are you grasping this, my friends? American citizens use a gun in self-defense some 2.5 million times every year. That is over 6,800 times EVERY DAY. This absolutely dwarfs the numbers of Americans who are killed with guns.

FBI statistics report that 9,400 people are murdered with a gun each year in this country and 4,000 are murdered with instruments other than a gun. These are four-year averages from the most recent data (2013 - 2016).

So, for every one homicide committed in the United States with a gun, at least 266 lives are SAVED with a gun. And that statistic is actually very conservative, as there is no way of knowing exactly how many lives are truly saved each time a gun is used in self-defense. A large percentage of those DGU’s obviously involved multiple potential victims—i.e., family members, friends, neighbors, fellow retail customers, etc.—so the actual number of potential lives saved with a gun each year could realistically total well in excess of ten million.

Think of it: Up to ten million (or more) men, women, teenagers, children, babies, elderly people, disabled people, mothers, daughters, sisters, brothers, sons, fathers, grandfathers, grandmothers, husbands, wives, cousins, friends, neighbors, and fellow townsmen are potentially SAVED each year by the presence of a defensive firearm. And in a large percentage of the time, the mere presence of a gun averted a crime—the gun was not even fired.

I can personally attest to at least three occasions when the presence of a defensive firearm thwarted a crime against my family members. In each of these occasions, the gun was never fired; the mere sight of the gun was enough to scare the would-be assailants away. Who knows how violent those crimes would have been had they been fully carried out? How many of my family members would have been seriously injured or killed had not a defensive firearm been present? Thankfully, we will never know.

Businesses that prohibit customers from being armed in their establishments risk the lives of their employees and customers daily. The shooting at a Nashville Waffle House is just the latest example of this gun-free business establishment being victimized by a criminal with a gun—this one was a criminal who was already prohibited by law from having a gun, by the way. Yet Waffle House continues to insist that its restaurants be gun-free.

Of course, the Nashville Waffle House was not the first Waffle House to be the site of a criminal attack. The around-the-clock Waffle Houses are routinely and frequently the targets of violent crime.

In the Fort Myers Waffle House shooting, four men violently attacked a single patron in the restaurant who had the good sense to be carrying a concealed handgun in spite of Waffle House rules and shot one of his attackers in self-defense. All the attackers fled the scene, and the criminal who was shot died before his partners in crime could get him to a hospital.

Yet Waffle House management is so fanatically anti-Second Amendment, not only does it prohibit its patrons from being armed in its restaurants (good luck with that in Montana) but also its employees and SECURITY GUARDS. Truly, the corporate executives at Waffle House are a bunch of imbeciles—and so is anyone who would frequent a Waffle House restaurant (or any other restaurant) WITHOUT being armed.

Then, of course, the big news this week was how the driver of a van in Toronto, Canada, killed ten people and injured fifteen others by deliberately running them over with his van. Will we hear any calls from the media for bans on “assault” vans? This is not the first time this kind of mass killing has taken place (London, England; Barcelona, Spain; and Muenster, Germany; for example). So, where is the call for “van control”?

You and I both know that the gun control Nazis are not interested in public safety. If they were, they would be insisting that gun-free zones be eliminated and that as many people as possible be always armed and prepared to use those arms in the defense of themselves and others. The facts confirm Professor Kleck’s research that GUNS SAVE LIVES.

Totalitarian governments have murdered more people than all of the John Dillingers, Al Capones, Bonnie and Clydes, Stephen Paddocks, Adam Lanzas, and Eric Harris and Dylan Klebolds of the world combined.

R.J. Rummell’s exhaustive research in Death By Government chronicles the fact that over 262 million people were murdered by despotic governments around the world during the 20th century alone. And the one single common denominator in all of these government mass murders is that the people were disarmed before they were slaughtered.

And as Professor Kleck has shown (and which has now been grudgingly confirmed by the CDC), the presence of a gun potentially saves the lives of at least 2.5 million people every year in this country.

Borrowing from the old American Express commercial:
Your personal defense gun: Don’t leave home without it.

And I would add one more proverb:
Your liberty defense gun (the AR-15 and similar semi-automatic rifles): Don’t ever surrender it.

P.S. I have two DVD messages and one book on the subject of the duty and necessity of being armed from a Biblical Natural Law perspective.
The two DVD messages are:
A Biblical Portrait Of The Righteousness And Requirement Of Bearing Arms
And
The Attack Against Our Guns And The Christian Duty To Repel The Attack
And the book I co-authored is:
To Keep Or Not To Keep: Why Christians Should Not Give Up Their Guns
It is critical that Christians and pastors understand their God-ordained duty of always maintaining their means of self-defense. I believe these two messages and the one book will do MUCH to help clarify and explain this sacred Christian duty. I encourage you to order as many as you can for your family and friends.
© Chuck Baldwin